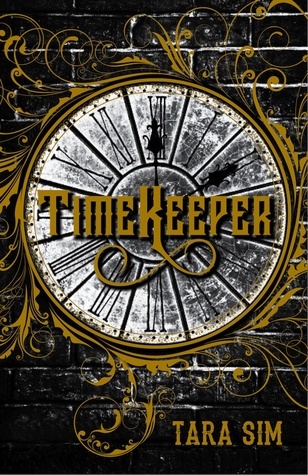 “In an alternate Victorian world controlled by clock towers, a damaged clock can fracture time—and a destroyed one can stop it completely. It’s a truth that seventeen-year-old clock mechanic Danny Hart knows all too well; his father has been trapped in a Stopped town east of London for three years. Though Danny is a prodigy who can repair not only clockwork, but the very fabric of time, his fixation with staging a rescue is quickly becoming a concern to his superiors. And so they assign him to Enfield, a town where the tower seems to be forever plagued with problems. Danny’s new apprentice both annoys and intrigues him, and though the boy is eager to work, he maintains a secretive distance. Danny soon discovers why: he is the tower’s clock spirit, a mythical being that oversees Enfield’s time. Though the boys are drawn together by their loneliness, Danny knows falling in love with a clock spirit is forbidden, and means risking everything he’s fought to achieve. But when a series of bombings at nearby towers threaten to Stop more cities, Danny must race to prevent Enfield from becoming the next target or he’ll not only lose his father, but the boy he loves, forever.”

I started this book last week after receiving a copy in exchange for a review thanks, Skyhorse Publishing! I thought the cover was fantastic and the tagline was immediately grabbing for my attention. I didn’t read too much into the plot but I had to know why two o’clock was missing from the clock?! At first, I thought it would be a much bigger mystery as the why the clocks were missing parts and I expected a huge adventure but it was more meaningful than that and actually quite the romance and I finished it very quickly.

This world is so interesting, it’s the world where time rules all. If the time is wrong in one town it will slip out of alignment with the rest of the world and the people living in that town under the clock’s perimeter could face great danger. Danny was an endearing character with a past accident that he’s still suffering flashbacks and memories of until he finds someone that makes him forget all his troubles when they’re around. I also loved Colton dearly and I’d just love to give him a big hug so I think he’s my favourite character!

Timekeeper is Tara Sim’s YA novel debut and the first in the three books of the series. I’m interested to see where this series is going because Timekeeper could have been an excellent standalone since the author did so well to explore the story and wrap it all up in the end. I think the next book must be about other Stopped towns and I’ll definitely be looking out for it! Timekeeper is released on the 8th of November so make sure you borrow or buy if you’re interested after reading my review or the description!

“What the hell kind of apprentice are you?”

“If she’d done something different, she could have had a happy ending, too.”

“You’re chaos and order and everything in between.”

So, Danny Hart has the ability to connect with time, to feel it and work with it. That sounds like such a cool thing to do but I can just imagine the immense pressure that would put someone under. One wrong move, one broken part, and a town could be Stopped forever! He was a great guy to read about and I really cared about him and his well-being when he was struggling with his fears.

Danny also has something else to worry about because his father has been trapped for three years in a Stopped town. He knows he will probably never see him again but it’s possible the new tower being built could cross into the town’s time zone and free everyone trapped inside. All Danny wants is to work on that clock and be there for his father but his fear and emotions of his accident are stopping them from giving him the job.

Brandon, Danny’s new apprentice was instantly strange to Danny and to me. Brandon didn’t dress like a mechanic, he didn’t know what to use to repair a clock and why does he seemed deformed at one moment and fine the next? Then when Danny was telling him about the story of Rapunzel, he had such sympathy for the villain and I totally fell into the trap of thinking he was behind all of these clock issues. He was, but not in the way I thought. Brandon was actually Colton, the clock spirit!

Colton was so lovable and sweet but we were constantly reminded that the clock spirits were such sweet and innocent things and with barely any knowledge of what their effect is on the town’s they run. So we find out that the reason Colton’s clock had so many issues is because he was intentionally hurting himself to get attention and proper maintenance. Then when Danny comes and treats him with such care, Colton decides that he wants Danny as his mechanic forever and becomes very worried or jealous when he isn’t around. All of these new emotions are dangerous for Colton’s town as his emotions are connected to time and when he’s with Danny he loses himself.

I loved the story of Danny and Colton and it was such a full exploration but Evaline brought in a whole new climatic ending to the book as the clock spirit of Maldon, the town in which Danny’s father is trapped. We heard all through the book that this older mechanic, Matthias, fell in love with a clock spirit and was ousted from the community but Danny didn’t believe it until he fell in love with his own. But Matthias was selfish and took Evaline from the town to keep her all to himself in his home so he was the reason for it all.

After a big showdown, Maldon was eventually restored and Danny’s father was freed! Lives were lost in the struggle against time but Danny and Colton are together and ready for their future. The end was such a wonderful happy ending but it still had that awesome tinge of danger for Danny and Colton to follow into the next book. I’m hoping they’ll be meeting more clock spirits in the next book and finding a way to stabilise time and make a safer world for everyone by the end of the series!

One thought on “Book Review: Timekeeper”