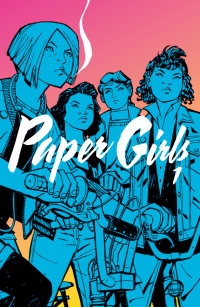 In the early hours after Halloween of 1988, four 12-year-old newspaper delivery girls uncover the most important story of all time. Suburban drama and otherworldly mysteries collide in this smash-hit series about nostalgia, first jobs, and the last days of childhood.

Since I’m such a fan of Brian K. Vaughan’s Saga I’m excited to read another one of his comics. Already from the front cover, I can see similarities between the two even though they have totally different artists. Then on the second page, there’s a woman with wings wearing a space suit with a robotic-looking face that displays images and if that doesn’t remind you of Saga nothing will! The illustrations have brilliant blocks of colour that vary throughout the issues but the blues, pinks and purples feel nostalgic. I’m impressed with the drawings in this series as well because there’s a lot of detail to the background as well as the primary focus.

But Paper Girls is its own story and the first issue opens up with the story of four girls delivering papers on November 1st with rowdy teenage trick or treaters still out and they discover something incredible in a basement of an abandoned home. I used to deliver pamphlets on my bike after school when I was around their age so I understand what they’re going through with the long hours and small pay but unlike them, I never discovered anything like this. It seemed like the girls stumbled upon some sort of alien technology but then something crazy happened at the end of the first issue, they found a small with an Apple on it but not the fruit…the brand.

The next three issues were a slow burn with a few big sparks. The girls welcomed the newcomer in their paper group but it was the start of some unfortunate twists for them all. One of the coolest things in the second issue was when the town went dark and they could see the galaxy just in the sky as clear as day but then the large dinosaur-like creatures started flying around that sky and that wasn’t so cool. Then we’re introduced to two possible enemies of the children, disfigured teenagers that speak a different language and people in advanced armour with weapons that speak a sort of hybrid language that can be translated to other language using their badge.

The fifth issue is where it gets interesting when we get a look at the person living on Earth that the advanced people answer to. For some reason, this person has a large room of people in tubes that were transported there by his followers. Whatever he wants them for, it probably isn’t good. Then the best part was at the last page when the girls met an adult Erin Tieng.