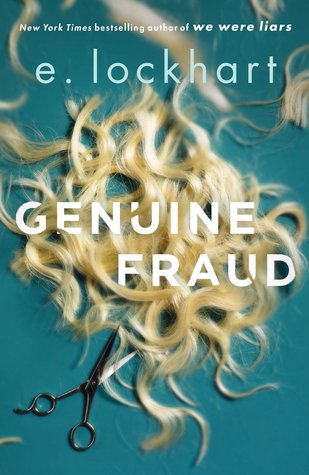 Imogen is an heiress, a runaway, and a cheat.
Jule is a fighter, a chameleon, and a liar.

Imogen is done pretending to be perfect, and Jule refuses to go back to the person she once was. Somewhere between the mansions of Martha’s Vineyard and the shores of Cabo San Lucas, their intense friendship takes a dark turn.

Alright, so I liked this book, I thought it was an awesome, intense thriller but I was really confused on the timeline of this book for most of it and I had no idea what this girl’s problem was for the majority of the book but then once it was all becoming really clear almost halfway or more through the book I was finally into the storyline. Once I finally had proof that I was right about how totally crazy a certain character was and I was getting actual answers then this book was so good but it took a while to get there. I don’t know if it was my fault but I really wasn’t sure if this girl was delusional and making up this entire friend for half the book or if she was just really into making new stories up for herself while still telling the truth. I guess that means it was a great thriller because it really did make me doubt myself and the story as it was told because you really can’t trust any of the characters. This book was like walking into a hall of mirrors that became increasingly intense until you’re running to that last page like it’s the exit door.

I did enjoy this book and it was great to have the same sort of psychological thriller that you would find in Adult Fiction in a YA book but honestly, I was just so confused with the timeline of this story. That was the biggest issue I had with this book because it jumped back and forth and to the side so very often that you almost couldn’t keep up with what time and place the current page was on. I think it would have been better for an easier flow if more of the story was compiled together in the right order, obviously still keeping the flashbacks when necessary but having it as free flowing as possible. I read a lot of psychological thrillers so I know telling their past to the reader in the present is a really popular theme but I think this one overdid it just a little bit because as I said I was just so confused all the damn time! It still worked out well though because when events would happen I could solidify where it was in the timeline and it was probably more interesting that way because it was probably as chaotic as the character herself.

Ultimately, Genuine Fraud was great because Jules was a fantastic, complex character but honestly, I think Imogen was the more fascinating of the two. That might just be because Jules really didn’t want to tell anyone anything about her real self but she explained Imogen’s life so well so you knew a lot more about her as a character. I was more understanding for Jules though because from her perspective she was playing herself off very well but for 95% of the time, I was just thinking you are crazy and that is so uncalled for! Still, even if I didn’t agree with her actions at all this was a fun book to read. There was plenty of twists and moments that made you realise each action was building up to revealing the overall picture at the end of the book. You’ll definitely be surprised at a bunch of things in this book and I’d love the heightening drama and twists throughout. I’d recommend this book to all thriller lovers that love the gritty, wild side of people that get pushed over the edge.

(Thank you to Allen & Unwin for a copy of this book for review. Genuine Fraud will be released on the 6th of September, 2017!)