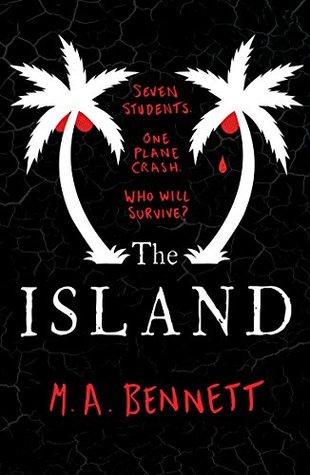 When a school summer trip is offered, Link can think of nothing worse than spending voluntary time with his worst tormentors. But when his parents say he can only leave Osney School – forever – if he goes on the trip, Link decides to endure it for the ultimate prize. But this particular trip will require a very special sort of endurance. The saying goes ‘No man is an island’ – but what if on that island is a group of teenagers, none of whom particularly like each other?

After a creepy and mysterious debut book, S.T.A.G.S, author M.A. Bennett is back with her second novel, The Island. I love that this book follows the theme of the black, white and red cover because it’s so striking and it really catches your eye. Then when you open up the book you find out the storyline is crazy. The Island is another book from the author that deals from an outsider perspective with a kid that doesn’t fit in and an elite group of tormentors from a preppy school. I had an idea of where this book would go having read her previous book but even though the central theme was the same it was still a completely different book that was thrilling in a new way.

The premise of this book is seven teenage students, a plane crash and a fight for survival that, obviously,  not everyone will win so instantly I was wondering, who will come out on top? Clearly, you’re most sympathetic to the person you’re reading about and everyone wants the underdog to come out triumphant but I also love cheering for a villain in a book and the perspective of the novel changed throughout. I wasn’t particularly fond of Link at the start of the book or the others really but all the characters had at least one thing that was enjoyable or humorous about them.

What I did love about this book was the very Battle Royale feel to it that The Island initially had just with the small blurb I read. Then once I started reading it I unfortunately had a difficult time picking it up because I just wasn’t getting pulled into it like I had with their previous novel. It wasn’t a terrible novel at all but I guess my expectations were just too high after how fantastic her debut novel was but it’s horrible to compare one book to another because that always ends up happening! Judging this book purely on its own though I would still say that I don’t think the plot was dense enough to make a proper impact on me and the idea fizzled out early on. However, I still enjoyed reading it the once and I look forward to seeing what Bennett writes next!

(Thank you to Allen & Unwin for sending a copy of this book in exchange for an honest review. The Island is out on the 25th of July in Australia!)