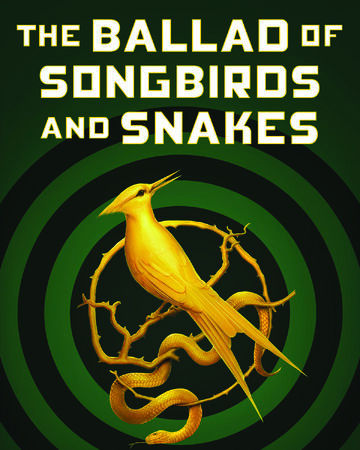 A Ballad of Songbirds and Snakes
by Suzanne Collins
Rating: ★★

“It is the morning of the reaping that will kick off the 10th annual Hunger Games. In the Capitol, 18-year-old Coriolanus Snow is preparing for his one shot at glory as a mentor in the Games. The once-mighty house of Snow has fallen on hard times, its fate hanging on the slender chance that Coriolanus will be able to out charm, outwit, and outmaneuver his fellow students to mentor the winning tribute.”

The Hunger Games is still one of my favourite trilogies as I found great young adult books weren’t as common ten years ago and very few young adult novels went on to become so popular until a few years ago when so many great new writers emerged and home streaming paved the way for so many great adaptions. The biggest issue in this book for me was that it wasn’t exciting. I remember reading the trilogy a few times because I enjoyed it so much. The peak for me being Catching Fire with the fantastic clock arena, that districts teaming together and the games played inside and outside the arena.

I expected this book to be much more based on the games and the creation of the games to what they were in the present day with the trilogy where everything was so advanced and twisted. This book was much duller and Coriolanus barely had anything to do with the games despite being the one of the first to mentor a tribute that would then go on to be so imperative to a tribute’s survival. I felt that he repeated himself so much throughout the book or maybe it was that he didn’t seem to change his frame of mind or his inner monologue until the very end of the book.

Lucy Gray, Coriolanus’ tribute, ironically the girl from District 12, was also dull to me and while I know the music was important to the author I found every song she sang to be wasted time for me. I didn’t care if she lived or died and I think that’s a problem if you’re not rooting for a character like that but I just found her to be annoying! The only person I think I actually liked in this whole book was Tigris and it was interesting to learn about their shared background. I also enjoyed seeing a few familiar family names mentioned.

I went into this book hoping it would make everyone like Coriolanus as a young man. I love it when an author can make you love the villain, such as Joe Goldberg. To a point, I admired Coriolanus’ direct approach to leadership, his truthfulness to Katniss, and his wicked ways. In this book though, I didn’t care for him either. Sadly, the one chapter I was totally absorbed in was the epilogue! I just don’t understand how he made such a flip at the very end to become the character I wanted to read about during the whole book! I’m still glad we have more from this universe because I wanted more backstory and I hope this can open up more books about other characters in this world or other important moments throughout the Hunger Games Universe.

One thought on “Book Review: A Ballad of Songbirds and Snakes by Suzanne Collins”