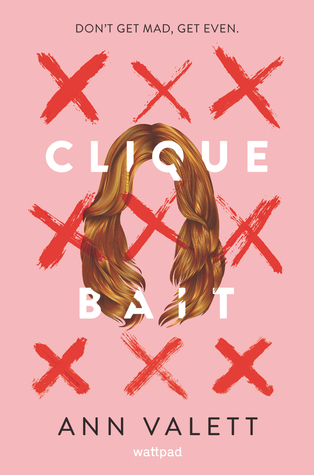 “Chloe Whittaker is out for revenge. Last year her best friend Monica’s life was unceremoniously ruined by the most popular students at their high school, so this year Chloe plans to take each and every one of them down. She’s traded in her jeans and T-shirts for the latest designer clothes, erased anything on social media that would tie her to Monica (and blow her cover), and carefully figured out how she will befriend the members of the clique, find out their deepest and darkest secrets, and reveal them to the world.”

Have you been having trouble finding recently released books or getting them delivered during all the closures? It’s not often that I write about a book in my monthly blog post and actually end up reading it in that month. I seem to be terrible with deadlines this year but this time, I did it and I managed to read a second one too so check out my review for A Ballad of Songbirds & Snakes and tell me if you agree or not…

Clique Bait was the first book on my list that I really wanted to read this month. Lately, I’ve definitely felt the struggle getting into my current reads and I really needed an engrossing book that wasn’t too serious. I saw this book and I thought it sounded fun like Heathers or Jawbreaker. I was also wondering just what the hell these popular students did to Chloe’s best friend that made her want to carry out such an extreme takedown.

Straight away you’re introduced to Chloe and in her diary entries/letters at the start of her chapters you learn more about her best friend Monica. You’re also introduced to those popular students she despises and you learn they each have something to hide and something to protect. This book ended up feeling a little more Riverdale than Heathers because of all the drama and the amount of relationships between the few characters but it was easy to get into.

I didn’t think the big unveiling at the end was very surprising and it was mildly annoying how easily Chloe lost sight of herself early into this book. Although clearly she didn’t think it through as I feel she was just being in shock and upset for losing her friend and wanted someone to blame. Even though she didn’t seem like much of a friend to begin with because when she made it into the popular group she forgot about Chloe so I don’t know why she would then make it her life goal to take down that group. However, it was an amusing read and the drama was funny to follow. I liked that she came out of it at the end too with her closure.

One thought on “Book Review: Clique Bait by Ann Valett”