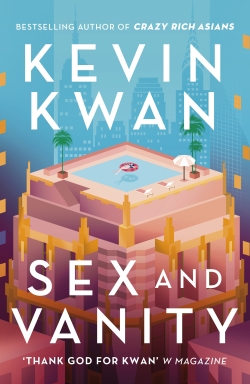 “On her very first morning on the jewel-like island of Capri, Lucie Churchill sets eyes on George Zao and she instantly can’t stand him. Daughter of an American-born-Chinese mother and blue-blooded New York father, Lucie has always sublimated the Asian side of herself in favor of the white side, and she adamantly denies having feelings for George. But several years later, when George unexpectedly appears in East Hampton where Lucie is weekending with her new fiancé, Lucie finds herself drawn to George again.”

Crazy Rich Asians was one of my favourite books of the year when I read it because of the hilariously accurate portrayal of some things and the highly dramatised fun of other parts in the book. I loved that at its core it was also a family story, revolved around their lives and entwined together with love and hilarity. So, when I spotted Sex and Vanity coming this year, with that amazing cover, I was thrilled for another great book from Kevin Kwan. I was really pleased to read the blurb and see it was not only an adorable sounding love triangle but the character was of mixed heritage.

Personally, I love reading books with a main character that comes from an Asian background because I loving feeling the connection to that background. As someone of mixed heritage I also really enjoy these books where the character is also mixed because it’s much more relatable to me for what they feel. Reading about Lucie and how she favors the Caucasian side of herself because of the people she surrounds herself with over her Chinese heritage resonates with me as I can understand feeling that divide in cultures depending on who you surround yourself with or what you’re doing.

This book was so cute, from the start I was swept up in their glamour and I fell instantly in love with Lucie and George’s chemistry. I really wanted to see Lucie embrace both sides of her heritage in this book and follow her heart over trying to suppress it and how she feels. I honestly don’t even know why she would try to hide that side of her as you would think being able to put yourself apart in a crowd of rich girls would be a good thing.

Overall, this book seemed to fly by and it took me no time at all to read. I really enjoyed the starting romance between Lucie and George where they had such a clear attraction and couldn’t keep apart. Then in the second part it goes forward to Lucie, engaged to another man, visiting East Hampton with family and ultimately running into George because of their mother’s new found friendship. Being together again makes all her feelings come rushing back and really her fiance is nothing compared to George. With the conclusion of this book I feel like it went so fast because it is a pretty short book but I was still happy with how it went. There was romance, hilarity, drama and big-money moves. It was another enjoyable and hearty read from Kevin Kwan.

2 thoughts on “Book Review: Sex and Vanity by Kevin Kwan”