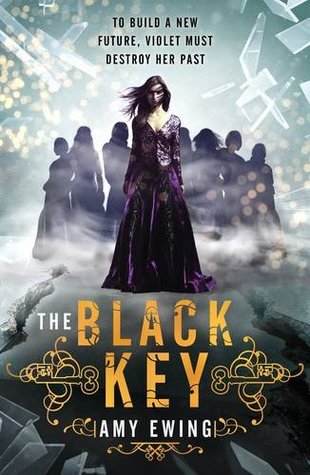 “Violet and the Society of the Black Key are preparing to launch an attack on the royalty, and Violet has a crucial role to play. She must lead the surrogates as they infiltrate the Auction and break down the walls of the Lone City. But her sister, Hazel, is imprisoned in the palace of the Lake. In order to save her sister, she must abandon her cause and her friends and return to the Jewel.”

The Black Key is the conclusion to the Lone City series, centred around Violet Lasting, cruel royals and the Society of the Black Key. I love how these covers match so well and tell a story on their own and I’m glad we get these ones in Australia because I definitely prefer them. I read the first book in this series early last year in May as a recommendation from a friend and I loved it. The Jewel was something so unique and totally thrilling, it was the world I wanted to be consumed by as I eagerly flipped each page. It was a completely unique book with such an interesting concept. I couldn’t put it down and I didn’t want the book to end. I loved the mix of royalty and all the fancy rules and etiquette coupled with the magic and modern inventions.

Then in October, six months after I read the first book, The White Rose was released and I was still strongly interested in the story so I jumped at the chance to read it. I enjoyed reading more about this world and Violet’s struggles but it was a very different setting in this new area with different goals after they escaped the palace and left behind the setting I had loved so much. I found this book hard to read and it took me a long time to finish it. I just didn’t enjoy it as much as the first one and that was depressing because I truly loved the first book but there was suspense and I did like the direction it was going.

So now we come to the present, The Black Key was released in Australia this week and I picked it up the day it came out. The first thought that came to my mind was how small it was! I’m so used to reading books that are at least four hundred pages so at three hundred pages this book was like a short story! I had actually forgotten the majority of the small things that had happened throughout the first two books but the start of this book jogged my memory and I was all up to speed in no time.

This book was pretty great because it was so short so there were very little drops in the story and it only took about two hours to read at a slower pace. I liked where the story went and something unexpected happened and it resolved my issue with thinking that the story was too straightforward. I enjoyed going back to the Lone City and seeing Violet go through everything she did and had to do. I think it was a good conclusion to an awesome series.

“Their blood shall never sit on the throne!”

Violet’s sister is still in great danger as she’s being used as a surrogate in Violet’s place and in the home Violet knows is so deadly, the girls are continuing to save more girls destined for the auction, and instead they are showing them the way of their true power and Violet is working with The Society of the Black Key to take down the government and upper class. I was wondering what she would do to fill the book since the takedown of the city seemed to be almost ready to go but it was a good twist to have Violet’s sister be in severe danger, causing Violet to abandon the plot and go to her and luckily, Garnet’s wife needed a lady-in-waiting so we get to see that city again from the inside. Then when she successfully fools most people into thinking of her as no-one special she finds Hazel and Hazel is not in good shape.

After failing to become pregnant, they still performed multiple surgeries on her to change her into a match for Violet. They even changed the colour of her eyes, the reason why she’s called Hazel! Of course, they were using Hazel in her place and I figured this would happen but having her killed because of the child they think she’s carrying is insane, but not the real reason she’s being targeted.

Raven has recovered from her awful treatment by the Countess and continues to have a clear crush of Garnet but Garnet is still in the early days of his marriage and a new position in the city. We know he doesn’t care for his wife but he can’t be with Raven! But everything was perfect in the end. Raven had her closure with the Countess, Garnet lost his wife and they were together in the end! Happy ending for everyone, except Coral!

Olive is so frustrating, to still have such an attachment to her mistress after knowing what was in store for her and witnessing the brutal scars on the other girls. I think that she is meant to represent a person suffering from Stockholm syndrome but I was just hoping the entire time that she wouldn’t mess it up for everyone. I’m glad she actually fought with the girls but her death was so quick. It was fitting that it was at the hands of the woman she worshipped so insanely but it was over way too quick.

Being forced into a marriage is never good, I assume, but Coral is the best forced-wife Garnet could hope for. She doesn’t question why he doesn’t sleep in the same room as him, she doesn’t seem to want to be romantic with him and she’s ignorantly sweet. She still has the stupidity of a sheltered girl living in total bliss but she has a sunny personality that makes me just a little more sad to see her go, even if it works out well for Raven.

The Duchess and the Exetor’s affair were meant to be shocking but I didn’t really care. It explained why Hazel was in danger and who was behind it and I did think it was a good way to plan it but I didn’t care about them. It was interesting that the Duchess was jilted for having to give up her child from their affair before their marriages and I would have liked to hear more on that but I’m good with how it all played out.

I’m so sad that Lucien died, and because he was saving Violet! He had the most interesting story of them all and he was incredible all on his own. His love for Violet was so strong and he was a brave genius but his death was the most effective. He was the Cinna to her Katniss and I didn’t want him to die but I absolutely understand why he did.

It was a great story throughout it all. I don’t think there was enough Ash & Violet but I loved all of the things Violet went through and that there was still all of the great settings I had fallen in love with in the first book. I think the way some of the girls really loved killing and getting their revenge was a little unhealthy but I think they deserved it after how they were treated. I hope the system becomes healthier to everyone so it’s fair but I think Garnet will be charged with running it all since Violet is more interested in living a quiet life with Ash. I wonder if they’ll have children. Hmm, I hope one day the author does a little short story, ten years later sort of thing for some anniversary of the book.